Hippie Mafia is a story of urban redemption, examining how greed and loyalty influence decisions in a sub-culture that is generally accepted as being peaceful and without strife. HIPPIE MAFIA BY JESSICA EVANS 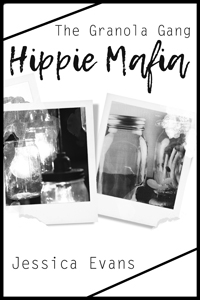 Hippie Mafia is a story of urban redemption, examining how greed and loyalty influence decisions in a sub-culture that is generally accepted as being peaceful and without strife.

Hippie Mafia is a multi-voice narrative that examines gender roles within the constructs of urban identity. The antagonist of the work, Mason, is the antithesis of the female archetype, both in her decision making skills and in the progression of her character through her stand-alone agency. The female protagonist, Amy, is one who responds to the situations she finds herself in as one might expect of a standard female character. It is the hope of the work that these two conflicting female identities will help the reader to begin to understand and examine ways in which female characters do not need a male counterpoint to advance their own stores.

Hippie Mafia
The Granola Gang Book One
By Jessica Evans
4.5 stars (out of 5)
Review by Nancy Dafoe
Refuting the claim that Hippie Mafia is strictly a Southern California cultural phenomenon, propelled by drug users and dealers, Jessica Evans takes readers deep into a group within the counterculture of Cincinnati, Ohio in her new novel Hippie Mafia: The Granola Gang. As benign and healthy as the subtitle sounds, Evans’ gang is anything but hearty or harmless to each other. Betrayal ultimately strains and unravels the bonds found in what was once a tight-knit “family” of drug users chasing Phish on the circuit.
Propelled by the rawness, as well as naturalness of dialogue, the narrative moves with agility and acceleration until the denouement:
“‘Hello,’ I offer. She looks around the room like she's seeing it for the first time, too.
‘Like these kinds of accommodations,’ she snickers.
‘Excuse me?
‘You know, a room like this,’ she says, waving her hand, ‘with four blank walls and nothing to do or anyone to see.’
‘I've been in worse places.’”

This is a subculture the author appears to know intimately, with knowledge of “moving weight,” yet Evans’ narrative is empathetic. At the center of this group of friends, who grow, cook, sell, and use, are the slightly unusual best friends Mason Williams and Dugan Reeves, and brother and sister Amy and Ghost Barnes. Mason is a lesbian with a tough outer shell and a soft inner core. Dugan is half in love with Mason, as well as in love with Amy. Their lives of casual and serious sex, love affairs, fighting, stealing, drug use and selling, parallel their individual and collective search for redemption on the less-than-prosperous streets of Middle America in Cincinnati.
We come to know Amy, Angela, Beata, Mason, Ghost, Dugan, Nola, Ian, Julian, and Theseus intimately, these characters who took communion in drugs on tours. Their sacrament, however, comes with an end date. Almost from the opening pages, we know it will be Mason who betrays the family, but Evans’ story examines people, not caricatures, the how and why, as much as taking us inside the limits of loyalty and love within this counterculture.
Brother and sister Amy and Ghost may be the heart of the Granola Gang, and Ghost quite possibly dispenses the wisest words, even from his tentative stance: “‘All I'm saying is you're too narrow. Your focus is too pinpointed. It's always Dugan. Dugan can't just be your whole world. Let this be it, man. Get your ass out of there while you can still remember who you are.’”

Mason and Dugan spur the action, but it is Theseus and Julian who symbolically orient this novel that is as much about love and fumbling attempts at redemption as drugs, violence, and betrayal.

Posted by Christine Young at 12:01 PM