Did Hubert Fulmer find a lost manuscript before he plunged from his apartment onto Seventh Avenue? THE MONTEVERDI MANUSCRIPT BY JOSEPH ALLEN 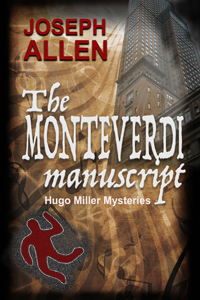 The Monteverdi Manuscript is a Who done it that kept my interest all the way through. It told me a lot about New York City which is a city of great interest to me, and about London, another city I love. Allen either knows those cities well or he did a lot of research on them.

I did have some trouble at first figuring out quite who was who, but within a few pages I figured out who Hugo Miller was and Fred and Ruth and Carl how they connected with one another. These characters are well described so that I could picture them.

The book is very much about Opera and professionally performed music, and tells the reader a great deal about it.  I am not an Opera lover, though I have attended several Operas around the world. I was rather amused by the reference to La Fenice, the Opera House in Venice. A friend of mine, an Opera lover, took a job in Venice just so that he could go to performances in La Fenice only to have the Opera house burn to the ground before he got there.

I wish I could say that Allen had me fooled all the way to the end but that wouldn't be true. There were some twists and turns I didn't expect, but I had a feeling from near the first that I knew who done it. I won't tell you though. You can read it for yourself.

All in all I enjoyed THE MONTEVERDI MANUSCRIPT. It is amusing and worth the time investment.

Did Hubert Fulmer find a lost manuscript before he plunged from his apartment onto Seventh Avenue?

The action revolves around the death of a famous musician, who hits the pavement outside Carnegie Hall from the window of his apartment seven stories up. He has recorded keyboard versions of a lost opera by Claudio Monteverdi, the man who “invented” opera. Set in New York, London and Venice, action includes a kidnapping, drug use, prostitution, LGBT characters, one character who comes back from the dead, and three classic New York detective characters led by Hugo Miller.


"Lucky for me. Can I have my engagement ring please?"
Posted by Christine Young at 12:01 AM