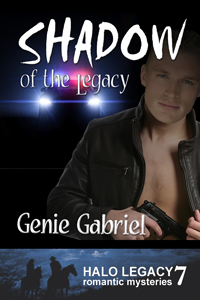 Title: Shadow of the Legacy

BLURB: Shadow of the Legacy

A letter from his dead father and a confession of killing a woman throws a shadow of suspicion over the life of an easy-going cop. When he returns to his hometown to find the truth, he discovers secrets that have held the town hostage for decades, danger that threatens his life, and love with a woman determined to be no more than friends.

EXCERPT: Shadow of the Legacy

Rochelle closed her eyes and drew a deep breath, then moved into her warm-up

routine. She hadn't had the time to do any kick-boxing for awhile, but already her body hummed in anticipation of the challenge.

Johnny was not her opponent, but the cancer that had invaded her body. No battle was more important than this one. No prize more vital: her life.

Her first moves were simple. A few easy punches before she bobbed and danced away, though there was no need for defense as Johnny threw no punches. If only the disease was as yielding. Instead it had snuck up and attacked without warning. Rochelle jabbed with her right hand and followed with a punch from her left.

Adrenaline pumped through Rochelle's body as the familiar moves flexed and worked her muscles, and brought a smile to her face. Then she lifted first one knee and the other, followed by a series of alternating punches. Right, left, right.

Rochelle drew a deep breath and blew it out, already feeling winded less than ten minutes into sparring and hating that weakness.

She pushed herself to throw the momentum of her body into a right cross, then spun around to deliver a one-two kick before bouncing away on the balls of her feet.

She moved toward Johnny again, throwing another flurry of kicks and punches, feeling the heat in her body and fighting the fatigue slowly creeping over her.

"Let's take a break." Johnny caught her in a clinch.

Rochelle shook her head and moved away, throwing another right hook that fell wide of Johnny's head.

A vision of the damning spots in the x-rays filled her head, and Rochelle delivered another combination of kicks to Johnny's mid-section. In her mind, the lumps dissolved a little more each time she made contact.

She threw a knee, followed by a side-kick, and another spot disappeared from her mind's eye. Rabbit punches with her right hand eliminated a few more.

Rochelle kicked and punched until the vision in her head was clear of spots and fatigue was claiming her body, sapping her energy as it spread from her arms, down her torso, and turned her feet to leaden weights. She fell against Johnny in a clinch, and he supported her as her body went limp. Spent and sweaty, Rochelle surrendered to the exhaustion claiming her.