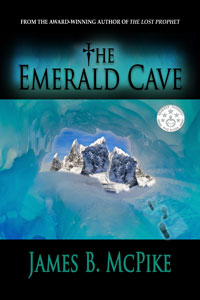 Renowned Ministry investigator Vince Ramsey returns for his biggest mission yet. To hunt down a dangerous arms dealer who is after the Holy Grail.

The Ministry of Jerusalem calls in their top investigator—Vince Ramsey—to track down a shadowy arms dealer whose last known whereabouts were in a reclusive village in France. It soon becomes clear that the arms dealer was after a fabled treasure—something so powerful that it could be used as the ultimate weapon. Ramsey enlists the help of April Fulton, an expert in rare antiquities, to aid him in his whirlwind quest.
April traces clues to a controversial physics lab in Switzerland, led by a mysterious figure. Hunting down another lead, Ramsey travels halfway around the globe to a decommissioned military base in the most remote place on earth—Antarctica. There he must battle the dangerous elements and a ruthless team of mercenaries in a race to find the treasure in time.