Sky Eyes world is turned upside down when she is forced to live in the white world as Kathryn Clay. 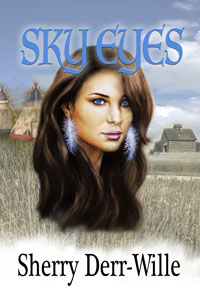 Sky Eyes knew she was different from the other children in the village, different even from her brother, Otter Pup. The skin beneath her clothing was white rather than brown, her hair was not black, but brown with red streaks when the sun hit it right. The most important difference was the fact her eyes were the color of the sky, lending their color to her name. Although her friends noticed her differences, they never teased her about them. She was accepted for who and what she was.
When she was old enough to question the differences, her mother insisted her appearance was a gift from the Great Spirit. As a child, she accepted the explanation but as she became a woman, she wondered if there was something Morning Star wasn’t telling her.
“Sky,” her mother called. “I need your help.”
Sky set aside her thoughts about her differences and hurried to her mother’s side. From the corner of her eye she caught a glimpse of her brother. Otter was preparing to go hunting with their father. She wished she could go hunting rather than do the woman’s work her mother planned for her.
“What can I help you with, Mother?” she asked as soon as she stood beside her mother at the cooking fire.
“I would like you to come with me to the river. It is spring and I know there will be many plants for us to pick to enhance our meals and use in the midwives’ lodge. This is always my favorite time of the year. It was in the spring when both you and your brother were born.”
Sky never tired of hearing her mother tell of how she gave birth to two babies at the same time. It amazed her how her mother carried two children within her now slender body.
They walked in silence until they came to the river. “I brought you here for a special reason today. You have recently become a woman and soon some of the young men will begin to court you. I know there is one special young man who has already spoken to your father. Before the time comes, I must tell you about your birth.”
“I know how you carried Otter and me in your belly until it was time for us to be born. What else is there for me to know?”
“There is much,” Morning Star replied as she turned away from the river. “I did give birth to two babies, a boy and a girl. When they were six suns old, the spirit of death came and claimed my daughter. I still had Otter, but my heart was heavy. After your father buried the baby, we came to this area of the river to hunt for spring greens. We had just arrived when I heard the cries of a very young baby. Running Deer said not to investigate, but I could not help myself. What I found was a woman dying of childbirth fever. We were surprised because she was white but she spoke our language. She begged me to take her child and not to let her die. You are the baby I found in the cabin. I stayed with your mother until she drew her final breath.”
“Are you saying you are not my real mother?” Sky Eyes asked, hardly able to believe the story her mother just told her. 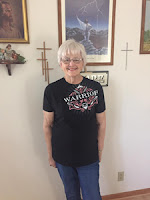 At the age of fifteen, Sherry Derr-Wille walked into her sophomore English class and fell in love with writing. Her teacher, Earl Brockman, The Duke of Earl, announced that anyone getting an A on the first test could sit in the back of the room and write. Since no one ever told her to stop the assignment, she continued to write for over forty years before becoming published in 2003.

Married to her high school sweetheart, Bob, for over fifty years, she calls him a saint for putting up with a crazy writer. Together they raised three children, have nine grandchildren and five great granddaughters.

Born a country girl, she loves living in a mid-sized city close to the Illinois border in Wisconsin. Being retired gives her time to follow her heart with her writing along with editing for several private clients an three publishers.

Facebook page: SHERRY DERR-WILLE
Posted by Christine Young at 12:01 AM