In The Power Club: Some kids play piano. Some kids make hook shots. Some create darkness…or teleport…or fly. Damon has what ordinary kids want: a power. Ords have what he wants: freedom.

The Power Club is a middle grade Sci/fi Adventure 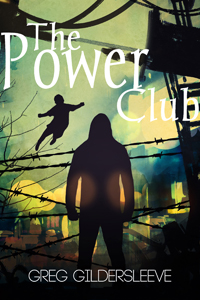 
Two agonizing days passed before Damon’s leg healed enough that he could walk into the Evanses’ backyard. He approached carefully.
“HEYDAMON.” Vee’s words ran together as he sped by. Damon looked left and right. He barely caught a glimpse of the super-fast kid.
“Glad ya made it.” Danner’s voice boomed from overhead. Damon looked up to see Danner towering at a height of fifteen feet.
Kyle waved to him from across the yard and turned to Denise—yes, Denise was there, after all. So was another girl. Ali Reeves lived up the street. She possessed one of the most coveted powers in the district: the ability to fly. Ali gracefully swooped above Danner’s head. He reached out to grab her with his massive hands, but she flitted higher, out of his reach.
Her long brown hair flowed over her face, partly masking an exhilarated smile. “You can’t catch me,” she teased.
“I can if I grow bigger,” Danner boomed, “but I wanna give ya a fair chance.”
“Oh, you’re so sweet.” She swooped down between his arms, mussed his hair, and took off again.
“Hey, Danner—catch me!” Vee ran circles around Danner’s tree trunk-size legs. Danner ignored him.
Damon, unsure what to do, walked over to Kyle, who called, “Hey, Denise. What am I going to do next?”
The blonde girl stood several feet away near the stoop of the back porch. Her arms were folded as if she were bored by it all, but when Kyle called her name, her face lit up. Then her eyes glazed over, and she did something Damon did not expect. She raised her arms to the sky.
...fft.
A football appeared in the air several feet above Denise and dropped into her arms. She held up the football and laughed nervously as if catching it were a great achievement.
“Where’d the football come from?” Damon asked.
“My room,” said Kyle, finally turning to acknowledge him. “I can now teleport things without seeing them if I know where they are.”
“Cool,” Damon replied. Everyone knew powers got stronger as kids grew up. “But how did Denise know what you were going to do?”
Kyle leaned closer. “Can you keep a secret—” He stopped himself and rolled his eyes at his own mistake. “Of course you can. You’re one of us now. Denise can see the future.”
A light turned on somewhere in the attic of Damon’s memory. The jar of peaches! Denise didn’t make him drop it. She predicted he would drop it. Damon felt badly for misjudging her. Trying to cover his embarrassment, he joked, “I wonder if she can see how I’ll do on my math test tomorrow.”
“A big fat F!” Denise yelled from the stoop.
Damon felt exposed. “She heard me?”
“Or she predicted you were going to say it.” Kyle smirked. “Don’t listen to half of what she says. She sometimes jokes about predicting our futures.” He reached out to Denise and clapped his hands.
She raised the football to throw it. “I predict Damon’s going to catch this one.” A blur rushed behind her and the football disappeared from her hand. “VEE!” she bellowed. “Give it back.”
“Stopmeifyoucan.” The voice came from everywhere, some syllables from halfway across the yard, others hitting Damon in the face. Twice the blur rushed right in front of him, nearly blowing him off his feet.
“Vee, stop it!” Denise shouted. “You’re getting carried away.”
The backyard spanned an area large enough to allow Vee to run around the perimeter, creating what appeared to be a blurry fence, boxing everyone in. He darted between Kyle and Damon, zoomed behind Denise, and circled Danner’s massive legs, creating a powerful wind which assaulted everyone from all sides.
The wind pushed Ali higher and higher. “Help me! Her arms and legs flailed about in the air.
Danner grew another five feet and reached out his hand. Ali grabbed his giant fingers and thumb and held on for dear life as he guided her back to the ground.
Still, Vee did not slow down.
“He’ll tire himself out eventually,” Kyle shouted over the wind storm.
Damon remembered something he’d learned in science class. “Won’t he burn himself?” he shouted back. “The friction—”
“He’s got a speed aura. Almost nothing can hurt him while he’s running.”
Another light went on in Damon’s brain. He knew how he could both impress the others and join in the fun. The timing would have to be just right. He carefully studied every object in the backyard and noted Vee’s pattern. At just the right moment, he exhaled.

Greg Gildersleeve grew up in the northwestern corner of Missouri, where comic books and science fiction caught his eye at an early age. In addition to writing, Greg teaches writing at an online university, and won the 2013 Publication Award at Johnson County Community College, Overland Park, KS. He earned a bachelor's degree in English from Missouri Western State University and a master's in English from the University of Missouri-Kansas City. His work has appeared in Show & Tell, Teenagers From the Future, The Teaching Professor, Faculty Focus, and the Grantham Blog. He lives in the Kansas City area, where he hangs around too many coffee shops, listens to classic and modern rock, and daydreams a lot.