Rain can move in a slow and gentle rhythm. Rain can move with the fury of a storm. THE RHYTHM OF RAIN BY C. L. SCHOLEY 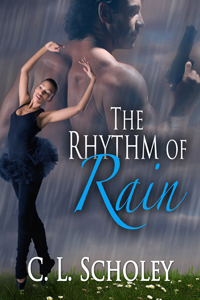 This book was a different kind of story and I have to say I wasn't sure how it was going to progress but the more I read and the more the story unfolded the more this story gripped me and took me for a very emotional ride.

Rain has always danced during a storm but she really wasn't sure why. It was like something was calling to her because when it started storming,  Rain felt like the storm was calling to her. Rain had a rough childhood even though she couldn't remember much. She did see her mom get shot during a storm. When the police found Rain that horrible night, she was alone and that was the night she went to live with her grandparents.
Rain was in love with Telor. Telor had watched Rain dance ever since he was eight and she was four. Rain's dancing had gotten better over the years and her movements always look as if she was telling a story. A story only Rain knew how it ended.

There was excitement through the entire book. Rain couldn't remember her past and she figured one day, she would figure it out. But the past has a way of making you deal with it on it's own  terms and this how Rain's past came back to her.  She was at the building where she practice her dancing and a man called Jaron was there. When Rain shook his hand, it was like she knew him from somewhere but then the feeling left. Jaron and Telor play a big part in this story. Little by little you learn more about both of them and each of them have Rain's best interest at heart. Jaron has a big part in Rain's past and he came back to keep her safe while she learns about that fateful night that her mother was killed. Telor has Rain's heart but it's like something is still missing from making her whole. You find out more and more about what makes Rain, Rain. Why she dances in storms and why it seems something is missing.

I cried throughout this story because the way the author wrote this book. It was like I could feel that part that was missing from Rain. The description of how she danced in storms, I could see what she looked like dancing. I could hear the rain falling and seeing her in the middle of the storm dancing. Rain has to come to terms with something in her past and it seems to all hit her at once. This book has drama between Telor, Rain and Jaron. It's hard to be in love with two guys and she doesn't want to hurt either one. The ending made me cry even more. This is so worth reading. Can't wait to read more from this author.

Barb gives The Rhythm of Rain

By Nickie Fleming
5 Stars out of 5

As I've told before, I am a proofreader for Rogue Phoenix Press (next to being one of its authors, of course). I don't always like the books I go through, but sometimes I come across one I really enjoy. An example of this is The Rhythm of Rain.

Rain is a young (black) ballerina. Dancing is her passion. When it rains, she is driven outside to dance in the downpour, as in trance. She doesn’t know why she does this – this mystery is revealed later on in the novel.

Telor, who lives in the neighborhood, often watches Rain dancing in the dark. He loves the girl, but isn’t sure she has the same feelings for him.

One day, Rain meets another dancer, Jaron, in the studio. There is something familiar about him, but she can’t pinpoint the memory.

Rain has to go back to the past and solve the mystery involving her. She is helped by the two men who love her.

I found this novel well-written and keeping pace. The author sets the tone with the first pages already and you’re quickly drawn into the mystery of Rain’s need to dance.

Rain can move in a slow and gentle rhythm. Rain can move with the fury of a storm. Fast and steady like a heartbeat, dancing across the street in the darkness of night. Jaron likes the sound of Rain in a fury, fiery passion. Telor aches for Rain's caress as it slides down his back, soothing his heated skin. Rain dances to her own song. True to her name, Rain is an element of mystery. It will take two lovers to ward off a flood of despair as Rain dances for her life.

EXCERPT element of mystery. It will take two lovers to ward off a flood of despair as Rain dances for her life.

From the recess of the darkness he watched her. Why on earth she had been named Rain he would never know. She was a tempest; she was a flurry; she was poetry in motion, and she meant absolutely everything in the world to him and more.
The storm crashed around them in the midsummer night. Thunder pounded out a staccato rhythm in sync with his drumming heartbeat. Lightning lit up the sky, zipping across the heavens—a force to be reckoned with—and still Rain danced, unfazed. Her clothing was saturated, as was his. Water plastered her white shirt to her chest, molding across the generous swell of Rain's breasts.
It was the same dance Telor had watched since he was a boy of eight and Rain was four. Ever since she and her grandparents had moved to his "nothing ever happens" little hick town eighteen years ago. Their houses were on a lonely dirt road, side by side, and backed onto a sparsely wooded forest near a small creek. They shared a gravel driveway that veered into a Y at the end.
Telor had seen Rain dancing from his window that first night many years ago—as he had tonight. Her movements over the years had matured with experience to create a story only she could tell, but didn't seem to know.
Telor remained frozen, hypnotized by her movements. Rain was a flurry of freestyle and ballet. She twirled, then dropped and crawled across the grass. Her movements were painstakingly slow. She let her head fall forward as though something were trying to defeat her.
Then determinedly, or perhaps defiantly, grass was ripped from the ground in chunks as she pulled her hands from the sodden earth. She rolled, jumped to her feet, and leaped gracefully in a grand jeté into the air over a stump. Her luscious legs stretched to their limits, one before her, one behind. Landing, Rain then spun in place with a fouette rond de jambe en tournant.
Around and around she went as the raindrops flew from her as fast as they landed. One deliciously slender foot tucked quickly behind the knee, then down, then up. All the while she whirled in place, making him dizzy as he tried to focus on her beautiful face.
Rain slumped to her hands and knees, remaining motionless for brief seconds while Telor caught his breath from the sidelines. She swung her head right then left in quick succession.
Slowly Rain stood; her body arched forward and went rigid as she let her hands slide sensually up her sides. She was on the move again, faster. She twisted and dropped, then up and spinning. Rain laced her fingers through the long strands of the tall willow tree to her right. Farther ahead she pirouetted. Whirling, turning her feet a batterie as they beat together in the air to the sound of thunder.
Telor felt his heart pound in his ears with the storm as Rain became one with the ferocity of the elements. Her movements were best described as a duende: Rain wasn't one with the dance—she was the dance. One could almost see rhythm flow through her blood with an undenied force. Making him—making him believe in an emotion so powerfully gripping, he went with her on her journey into the unknown…even if it caused his demise with his heart in his throat and his pulse pounding.
Then suddenly down Rain dropped once more and lay still, gasping, her hand to her chest. Telor clutched at his own chest, waiting. His breath caught and held. Oh God. Rain's rise to her feet was heartbreaking—a broken ballerina. With her legs shaking she fluttered her hands, but it was hopeless. Telor's eyes always went teary at this part. Her legs buckled and down she went. "Death of a dancer" was what Telor called this dramatic end.
Rain curled into a tiny ball, then emerged and drifted to her feet. It was as though her spirit came to life. Her gaze was mournful as she cast a woeful glance on where her body would be. Arms across her breasts, head bowed, she took tiny, flittering steps away from the scene as though unwilling to leave—but she had to. When she moved forward, she outstretched her hand with hesitance, reaching for something, someone.