When Micah died Sable thought her troubles were over but she’s plunged back into her nightmare when another family member comes after her. THE DARKNESS WITHIN BY K. J. DAHLEN FREE ON KINDLE UNLIMITED 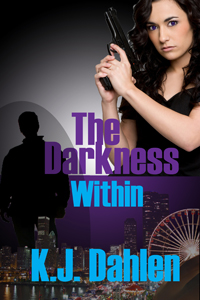 When Micah died Sable thought her troubles were over but she’s plunged back into her nightmare when another family member comes after her. He’s not only after what’s left of the Reardon family, but before he murders them he wants to bring down Gabriel’s empire. Sable has to fight to keep herself alive and the others. Will she survive the day of reckoning?

I am just a simple man, living the American dream;
I might be just like you except for the fact that
I am also a serial killer. At first I hated that part of myself, I tried to deny the truth for a long time but I couldn’t deny the excitement that I felt when I began hunting an innocent woman only to end her life. The more I hunted the better I became at hiding from the world my dark secret. Over the years I began to crave the rush I got when the raging beast inside me reared its ugly head. The obsession grew until all I could think about was the next kill, the next young woman whose life I would cut short.

Sable’s hand gripped the pages of what she had just read as she looked up at her boss. “Nick,” she wet her parched lips with the tip of her tongue.

Nick glanced over at her and frowned. Sable’s face was pale and there was a quickness to her breathing that wasn’t normal. “What is it?”

Sable held out the pages to him and sat down at her desk carefully. She put her hands to either side of her head and slowly closed her eyes against the shock she felt. She rubbed her aching temples in an effort to calm her nerves. When she opened her eyes, the first thing she saw was the plain manila envelope lying on her desk. The envelope had her full first name Sabella scrawled in ink on the outside of it. This was the envelope she had opened moments ago. Sable frowned as she reread the name on the front of the envelope. It wasn’t a name she used and no one other than her mother ever called her by that name.

Sable opened her desk drawer and pulled out a large clear plastic bag and carefully tucked the envelope inside. Looking up she saw concern on the faces in front of her. Without saying a word she handed the envelope to her boss, Nicholas Ramer.

Nick glanced at the envelope and compared the writing to that of the letters. Sable’s name was written by the same hand as the pages. He was surprised to find there was no return address on the envelope, and it hadn’t been run through the post office. It had been hand delivered. “What the hell? How did this get in here undetected?”

Nick looked over at the other members of his team and handed the envelope to Quentin Parks. “Run this over to fingerprinting and see who besides us has handled it.”

Nick glanced at Brandi Nichols. “Get a board in here and set it up with the pages. Let’s get a handle on what exactly we’re dealing with.”

He looked over at Max. “See if you can find anything on the surveillance tapes from last night. I don’t like the fact that this guy just walked into our offices without being stopped along the way. This is supposed to be a secure FBI office.”

Max nodded and left the room.

Nick pulled a chair up beside Sable and sat down. “Do you know anything about the pages? How they got into the office or who wrote them?”

“No,” Sable replied. “I found the envelope sitting on my desk and I opened it. I guess I really didn’t think about it.” She looked at Nick and had to ask, “What’s going on here?”

AlexJouJou for Manic Readers says: "The way all the pieces fit together is actually quite a feat--and a big kudos to the author for that. There are major bestselling authors that couldn't tie up a plot as nicely as this one does."
Posted by Christine Young at 12:01 AM