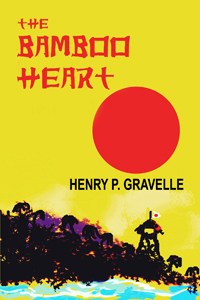 The Bamboo Heart is an emotional adventure of young love won and lost during an uncertain era in world history. Mary Bachelder has conducted a long and arduous search for her grandparent’s identities until she befriends Steven McGee, an elderly decorated fighter pilot suffering from post-traumatic depression. McGee reveals his recollections of three young lives separated through the Second World War and reunited inside a Japanese prisoner of war camp in the Philippines. The releasing of his deepest memories brings serenity from the horrors he suffered and closure to Mary’s quest.

For me to call a book really good or great, it has to move me. When young Fibber McGee, having joined the navy soon after America's entry into World War II, said goodbye to his very ill father, I choked up. The end of chapter 8 was stunningly dramatic. I actually stopped and took a deliberate breath before I read on. The Bamboo Heart is basically a memoir style narrative of incredible power and emotional depth. The story of McGee's childhood in a small town during the Depression was captivating, especially the developing love triangle between Brow, Fibber and Flo.

McGee tells his story to Mary who is trying to fulfil her mother's wishes to locate her own parents, Mary's grandparents. It was clear where the story was heading and yet I yearned for the detail, I wanted to know every twist and turn on the way to the inevitable conclusion. The author's descriptions of the characters was outstanding with precise descriptive passages snapshotting them. The graphic depiction of life in the Japanese prisoner of war camp was disturbing.

During the third person narrative, the scenes where Mary and McGee were interacting, featured some confusing changes in point of view, and I did not find it believable that he opened up to her so quickly. There were  a number of major coincidences later in the story as well. These things prevented me from giving The Bamboo Heart five stars, but it's a terrific book. I loved it. Overall the language was emotive and the story compelling. Highly recommended.

The Bamboo Heart—Book Review
On a scale of 1-5, the rating is 4 by William Delamar.

The story begins in a mission in Northern Mindoro in the Philippines during the second World War and then backtracks to the depression era near Boston. Three friends, Steven (Fibber) McGee, Florence (Nightingale) Day, and Kouki (Brow) Horikawa grow up together in the Boston area. Both boys are strongly attracted to Flo. At one point, Brow saves Fibber’s life, and Fibber would do the same for Brow if the occasion arrived. Then Brows family moves back to Japan. Fibber’s family goes through hard times as the war breaks out. Flo becomes a Red Cross nurse and is sent to the Philippines. Fibber enlists and is trained to be a pilot. The war brings all three to San-Ju, a Japanese prisoner of war camp. The scenes in San-Ju should never be forgotten. This is fiction based on fact. The story is told to a nurse who has a special interest in the lives of the three friends. There is a surprising twist at the end. This is a story that will be remembered.

I really wanted to give this novel a rating of five, but didn’t because there were times in the story when I felt the scene went on too long. I hesitate to say it dragged. It might have been that I was anxious to know what was next. I wanted Gravelle to get on with it.

The monsoon was sudden. Massive, black, billowing clouds rolling in from the east covered the afternoon sky. Angry swells crashed upon the coast from an angry sea, churning the waters into a maelstrom of wind and sound. With it, torrential rains pounded the grounds of Our Savior Mission atop the precipice where winds relentlessly twisted palm and banyan trees until they bowed for mercy.
The coconut frond roof of the Mission's bungalow pulsated from the torrent; its resonance intensified as the door opened. Bram Brooder stood in the threshold silhouetted by a single candle, its light diffused just meters into the darkness. His wife Emma joined him.
"I don't like this at all," she said, peering at the heavy clouds suspended above like gigantic black grapes. She spoke loudly over the storm's rage, for the sound was like a thousand drums striking cadence upon the tropical forest canopy.
"Ja, it will last a while, that it will," Bram answered, also loudly, his Dutch accent still prevalent after so many years away from home. He left years ago with his new wife to build a mission of salvation and preach the Lord's word to the indigent of the Pacific.
Bram looked again to the falling rain, wondering if he had made a mistake coming to this desolate place, a place where nature was at her harshest and intended to accept no changes.
He watched every day as the forest crept closer, reclaiming the land he toiled to clear. It became a never-ending battle to stay one step ahead of the vines, bamboo, insects, snakes, scorpions and other creatures that called this place home.
Bram sighed heavily with a sense of defeat, a feeling aptly kept from Emma who was stronger, with more faith and courage to continue. She had not sensed his weakening and loss of enthusiasm with every passing day. He could not allow her to see him falter; he must continue the appearance of the passionate, steadfast missionary.
At one time, he did have faith, a long time ago when he first brought his new wife to the Philippines to aid the hungry hearts of those seeking a savior. Faith fueled his resolve to build the chapel and fill it with lost souls, yet now the Mission was an empty structure, devoid of parishioners, believers, or the curious, not because of faith or his current lack thereof, but because of the Japanese.
The Nippon invaders jeopardized the Mission's function by confiscating all local livestock and poultry for their nearby detention center. Bram pursed his lips in anger, knowing what the Japs called it, yet it was officially Philippine prisoner of war camp number thirty, San-ju.
Meetings at the Mission were forbidden, along with church services and classroom study; all disrupted. Torture, rape and murder of the meager congregation and outlying villages and barrios was indiscriminately dwindling the number of villagers, farmers, and even natives from the mountains who had shown interest in the Mission's credo.
Yet the Brooders still had the chapel to pray to Him, their Lord, for Divine intervention. Bram considered whether these times were a test of his endurance or a questioning of his waning faith. He also wondered of the heavenly assistance they received this night… a child.
Bram and Emma looked at the little bundle on their bed, its small hands patting at the air while an endless plea for nourishment came from its mouth. Emma went to the bed, taking up the infant and ceasing its cries momentarily.
She sighed. Her breasts were not full, she did not lactate, yet would the child find temporary comfort? She opened her blouse and freed a breast, offering the nipple between her fingers while restraining the bulk of her teat from the baby's face. The infant hungrily accepted the nipple and closed its eyes. Emma smiled at the child's innocence and the wonderment of motherhood, a blessing she had not received. Now in mid-life, she wished the child had begun with her.
Emma dreamingly recalled the moment this task was placed on her and Bram's shoulders. It had frightened her, yet was it Divine? Who was this healthy newborn in the midst of a jungle paradise? Where was the mother? Emma gazed at the infant's tender features and remembered the Japanese officer who appeared earlier at their bungalow door. Emma and Bram stood quickly, confused and frightened by the intrusion.
"You!" The officer spoke with a mastery of English, his voice commanding yet reassuring. He held an infant out at arm's length offering it to the Brooders. "Take this child."
Bram went to the officer, hesitating at first, but the officer pushed the child into his arms. Bram was stunned, but accepted the infant wrapped in a military wool blanket soaked through.
"She requires nourishment." The officer looked across the room to Emma who was horror struck by his presence. Did he bring soldiers? Would they rape her and murder Bram? She waited for others, yet none came.
The officer nervously scanned the Mission grounds outside the door. His tunic and tan shirt were drenched from the deluge, his boots caked with mud. Satisfied he was not followed, he went to Emma. She shook with fear. Bram cradled the bundle in his arms, ready to plead for their lives.
"Care for the child, and take this," the officer said as he removed from his pocket a shard of bamboo attached to a rawhide strand. "Keep this for her, a remembrance of her mother."
The officer's features brightened as he ran his fingertips gently over the infant's cheeks. Emma thought she noticed his dark eyes moisten. He smiled at the baby then went for the door. "I must go."
"Sir," Bram said. The officer stopped, waiting for him to continue. "Please sir, who…?" Bram nodded toward the child.
The officer understood, answering as he left. "The daughter of an angel," he said, stepping into the darkness.